You are here: Home / iPhone apps / iPhone 3G and the killer apps 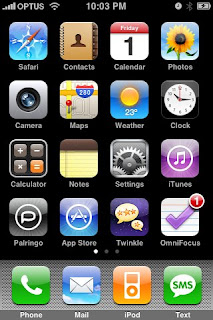 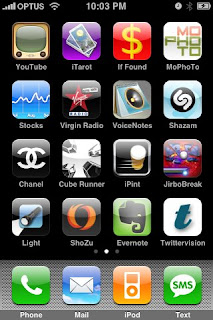 I got an iPhone 3G on the first day it was released and its been a love affair ever since. It’s replaced more than my old 3G phone – it’s all about the iPhone applications which makes it more like a mini mobile computer.

Fun stuff like Twinkle – which delivers on my wish list from my previous blog post – Twitter + photos + gps so you know who is Twittering around you. So fabulously seamlessly integrated that it becomes an insta-hit with the iPhone in-crowd.

Shazam – you can do a party trick hold the phone to the speaker and Shazam tells you the song and the artist and tags it for you in case you want to buy it later.

I got Palringo yesterday and I can use IM and stay in touch with all the MSN crew.

Omnifocus is one I have barely started using yet – it needs a little time and love to get the contexts working with the GPS.
So the things I find cool:

Hours of entertainment and time wasting even under the pretence of being busy and organised. Crackberry – your days are numbered – long live the iPhone!