Twitter is such a cute concept – tell everyone what you are doing in 140 characters. It’s classified on Wikipedia as a micro-blogging and social networking service, and I was fascinated to read that it was an internal R&D experiment from a San Francisco startup. You can sign up, micro blog & follow people on Twitter with similar interests to you. I started when I was working on a Second Life project as it was great way to find out about events within Second Life and about articles written about Second Life. I am erratic about my tweets on Twitter, but I still love its random quality, and I have about 30 followers – every time I get a new one it intrigues me why random information can be so interesting.

Many on Twitter use it like a mini narrowcast network, sending out links to web events, podcasts and cool useful things. NY Times, BBC Sport amongst other newsfeeds post real news items on Twitter. 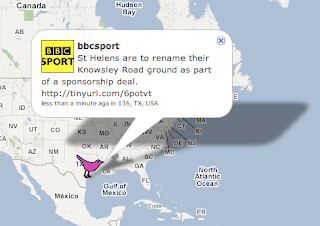 The other great thing about Twitter is Twittervision – one of the best content mash-ups – combining Twitter content and Google Maps. I really like the 3D view which also shows whether the tweets are coming from day or night and I could sit for hours just watching the tweets from around the world.

Almost exactly the same relationship exists between Flickr (the largest photo sharing social network) and Flickrvision, only this time you can see photos overlaid with the Flickr user and where they are from. Not sure how either of these mash-ups can help save the world, but at least you can see what’s happening from every corner of it.

Now you can get Twittervision for your Facebook page and do the triple mash. I’m looking forward to getting a new 3G iPhone when its finally released in Australia. Rumour has it GPS is included in the iPhone, so you could use your iPhone, do a tweet in Twittervision and your friends will know physically where you are as well as what you are doing. Almost better than calling, and saying “What are you doing now?”